Hello again, It’s Jose. I hope everyone is having a good day.

I’ve noticed how interesting the animal kingdom is to people. For example, a whole day is devoted to the Groundhog, an animal that really isn’t all that interesting and with all due respect, not that smart. We have more interesting and smarter animals to offer. Folks believe that these rodents can actually predict the weather and give him more attention than the educated weathermen. Our groundhog has parades and parties in their honor. I’m happy for them, but I really don’t see what the excitement is all about.

I also heard about a contest between panthers and broncos. Apparently, people are very excited about this showdown, and they are planning parties with friends. I must say that am very relieved to find out that the match is not a fight between real panthers and broncos, but human football players. I am a pacifist donkey who believes there is enough aggression among animals with that whole predator/prey system. It is still interesting that humans name their beloved teams after my animal friends.

I don’t know of a team named after Miniature Donkeys. I’m sure it is just an oversight. We can be very fierce and cunning. Donkeys are far better than Cardinals for example. Who thinks that is a good name for a tough football team? I think we should start a campaign for a team named for the Donkey. Who’s with me? 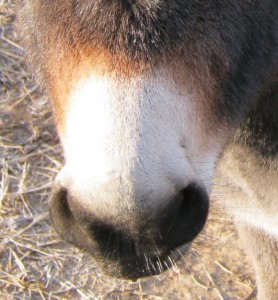