I have always said that God led us to this mountain for a reason. We have made so many great friends that started out as guests, which is one of the greatest gifts. One such guest retired here from Memphis and in the process she and I became really good friends. Such good friends that we set her daughter up with our son and soon became in-laws. We would often talk after the kids were married about how we would share a future grandchild. She already had one and was already “Yaya” which is what I had wanted to be, but I would settle for Gigi. We never really know in this life why things happen, but three years ago this past May she passed away of cancer. We would not be sharing a grandchild on this earth as we had planned. If you want to make God laugh tell him your plans.
In May, 2021, God blessed Charlie and I with our first grandchild. Jacob Howard Thomas was born to our son and my friend Laurie’s daughter Kelsey. When they found out they were pregnant I received a wine tumbler in the mail that said “Yaya est. 2021”. It was bitter sweet, I would be Yaya but without my friend. I was determined from the beginning that this little boy would know his “Angel Yaya”. Laurie’s daughter and I have always shown him photos and said that she is his “Angel Yaya”. Yesterday at almost 16 months he went to a photo that Kelsey has sitting by the couch of her Mom, took it in his hands and said “Hey Yaya”. Then he kissed it. I sat out on the bluff and cried upon receiving the photos. My friend lives on.
My Secret story will always be the people who have touched me and I hope that they will always have their own secret memories.
#serendipidy #thesecretbedandbreakfast #friendship #love #godsplan 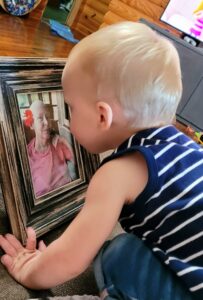