Hi! Ho! Jose’ here at The Secret Bed and Breakfast!! Kris came out to the barn yesterday and it looked like she was carrying a pack on her back. Now, I am familiar with such things since that is what donkeys are known for. As a matter of fact I believe one of my ancestors carried Mary when she was expecting Jesus. Anyway, I digress. It looked like a pack, but upon further investigation while she was putting down my feed I noticed that it actually had eyes!!! And then, it began to make strange noises, almost as if it were laughing at me! I am not sure what it could have been laughing at, I don’t think that I had anything on my face or backside but it certainly sounded like a laugh! When Kris came out to put the hay out the pack was still there, and this time she leaned down and told me to say hello to Jake. Why, there was a tiny human peering out of that pack and he had the bluest eyes!! Most livestock have brown eyes so I definitely saw the difference. The only thing I’ve seen with eyes more blue than that is Luca the new Aussie.
I did as I was told and gave the tiny human a good sniff which in donkey terms is a kiss. He seemed to like it as he made that laughing noise again. I hope Kris isn’t considering adding something else to my herd for me to watch. I have a big enough job looking after all those dumb hens who seem to have not clue that there is a fox in the pasture and won’t stay up at the barn!!! 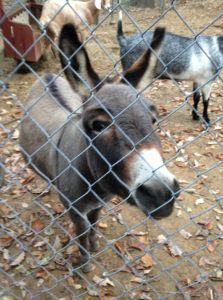