It’s a cold night in January.  Winter nights are the most thoughtful time of the year.  Perhaps its the lack of daylight or maybe just some ancient tendency handed down from our ancestors as a way to stay warm.  Whatever the reason I become more thoughtful in general.  Full winter moons definitely add to the mood.  The air is clearer and crisper when its cold, thus allowing the moon to seem so much brighter.  The January full moon was know to the Native Americans as the “Full Snow Moon”  because it was during this month that snow covered the ground more frequently.  The January 2018 full moon is known in modern times as a “Blue Moon” because it is the second full moon of the month.  I’m happiest because it is actually occurring during a lunar eclipse so it will appear somewhat orangish/red in color.   A spectacular sight rising over Weiss Lake here in Leesburg, Alabama!  Ironically I never really even paid attention to the moon until we moved here, and now I hate missing just one!  So if I go missing on January 31st just send someone out to the bluff!  I will be there with my camera, dressed in layers, surrounded by a warm blanket.  Who knows, maybe I’ll even have a nice hot toddy in my hand! 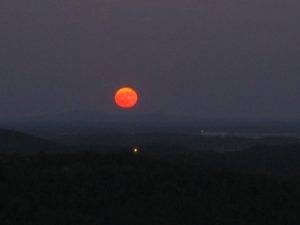