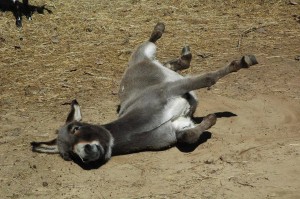 So, let me take a moment to explain last weeks “goat” incident. Now, I know most of you heard about it from my owner’s point of view, and I gotta admit it did not look all that wonderful from where she was sitting. You see, Toby has had sore feet for months. This means that he spends a lot of time lying around. This particular morning he was lying in the hay in the upper paddock. It was a cooler morning as a storm had just blown through so I was feeling just a bit frisky! I thought I would help Toby out with his cardiovascular work-out since he did not seem to be getting one any other way! What could be more fun than wrestling in the hay? Well, apparently my owner did not see it that way, it seems she thought I was trying to kill Toby. Now, in her defense, I did have him by the neck, but that is how us donkeys play. And while it looked as if I was trying to stomp him, I was really just executing one of those fancy donkey wrestling moves. It is all just instinct you know. Why do you think I am such a good guardian of the pasture!!!