When Millard Weaver built what is now the main lodge of The Secret Bed and Breakfast in 1965 it was considered extravagant for its time. Built on solid bedrock, the tile for the floor was imported from Italy. The wood beams in the ceiling are 2′ x 8′ double tongue and groove pine that was imported from British Honduras. The beam that runs the length of the house is actually metal but was painted to look like wood by and artist that Mr. Weaver hired. The entire home is concrete and steel that was meant to stand the test of time! Fifty years later, what was once built for entertainment now serves as a quiet retreat from the outside world. The built in intercom system has long since quit working, and we all know how useful the 42 phone jacks are today!
With Autumn fast on the heals of summer, make plans to visit our mountain “Secret”. The house itself is not the only spectacular sight on the property. The view off the bluff colored in reds and golds is an amazing sight that should not only be seen but experienced!
#autumn #fallfoliage #thesecretbedandbreakfast #visitnorthal 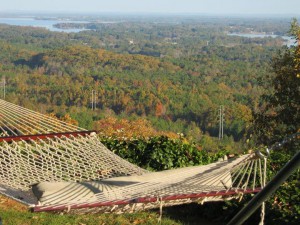