Hi Ho, Jose’ here!! So, there was a strange creature in the pasture yesterday. At first glance I thought it might have been Max, who for the first time ever had beat us down into the pasture. However, it was definitely much lighter than Max, and much faster! When it saw us it began to run, and so did we!! We had never seen such a beast and it was quick! Well, me being such a smart ass remembered what time of year it was, and having heard songs coming from the big house put two and two together. When the thing jumped clear over the fence I knew that my suspicions were correct……it was one of those reindeer that flies!!! How else could it have cleared such a tall fence? Now, it looked like it was in quite a hurry so I’m guessing that it had somewhere it was suppose to be! In the song those things are pulling a sleigh with a fat man in a red suit, and there are eight of them! All I know is that if all eight can jump like this one they will have no problem pulling that sleigh! The poor goats are traumatized, I’m guessing come Christmas Eve they will be up all night with visions of big, four legged hairy beasts coming after them!!!
#christmas #reindeer #thesecretbedandbreakfast #visitnorthal 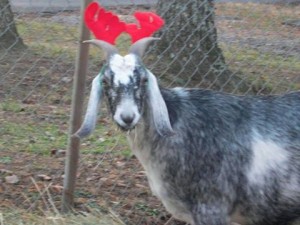